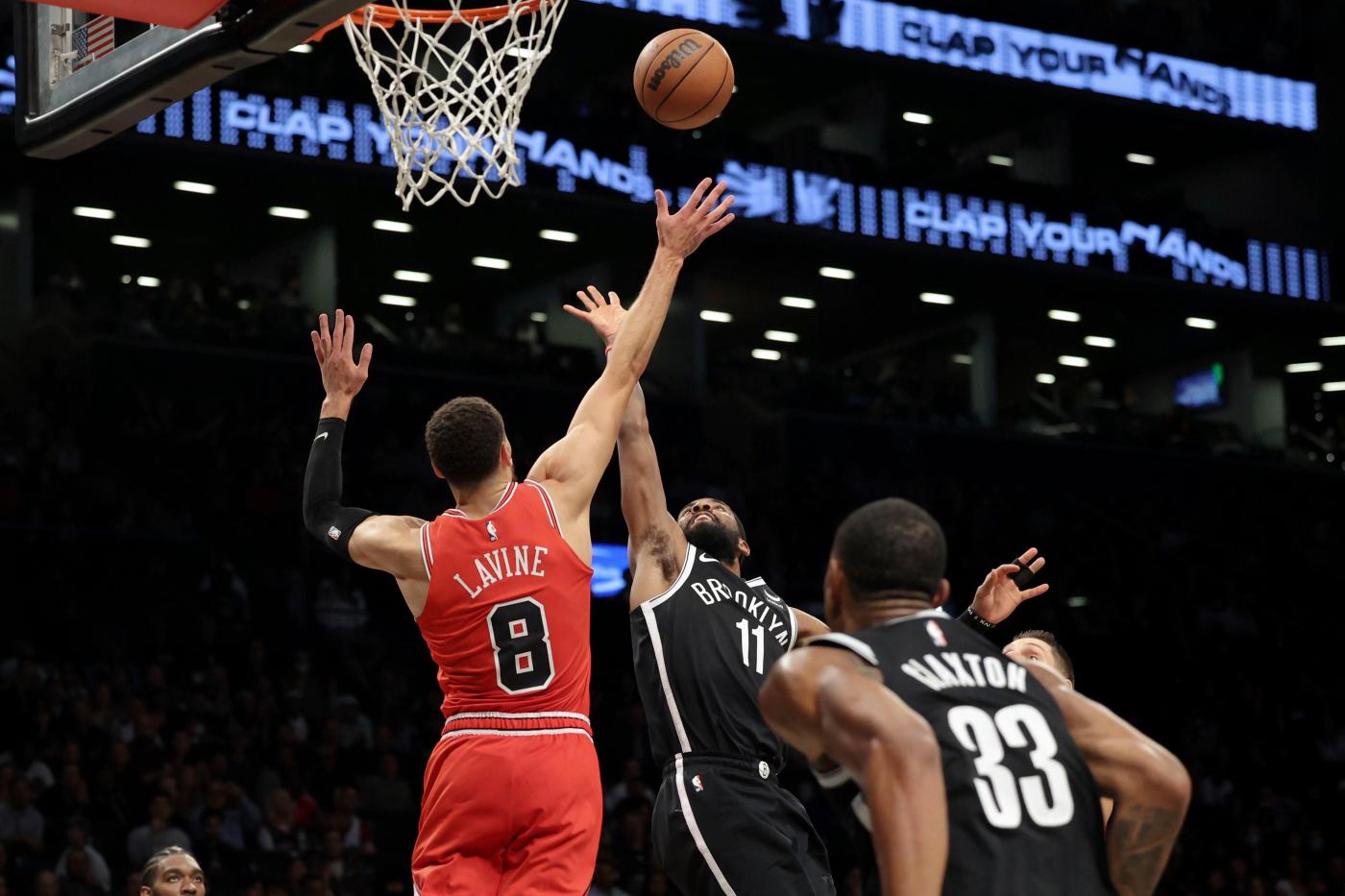 The Chicago Bulls came from behind to beat the Brooklyn Nets, getting 20 fourth-quarter points from Zach LaVine in a 108-99 victory Tuesday night at the Barclays Center in New York.

The win snapped a two-game skid as the Bulls (4-4) return home to host the Charlotte Hornets on Wednesday night at the United Center.

1. Zach LaVine and DeMar DeRozan exploded in the second half.

DeRozan has made a name for himself in fourth quarters. And while he had another second-half shooting surge Tuesday, it was LaVine’s explosive fourth quarter that drove the Bulls comeback.

LaVine scored 20 of his 29 points in the fourth, going 6 of 10 from the field and draining a pair of heat-check 3-pointers from well behind the top of the arc. His fourth-quarter efficiency was complemented by DeRozan, who shot 4 of 10 from the field in the third quarter.

The Bulls went on a 12-4 run to close the third quarter, cutting their deficit to 79-77, before taking a 101-90 lead midway through the fourth off a 16-2 run. The Nets imploded in the fourth quarter, and the Bulls took advantage to finish the game on a 24-11 run.

LaVine’s 29 points led the team, and DeRozan finished with 20. Ayo Dosunmu added 17 points after missing Saturday’s game against the Philadelphia 76ers with stiffness in his neck and upper back.

2. The Bulls continue to struggle with 3-point defense.

The win showed how 3-pointers will make or break the Bulls this season. They’re the NBA’s worst team at defending the 3-point line, allowing opponents to make 43.2% for 14.6 3-pointers per game.

The problem Tuesday wasn’t just the clip at which the Nets were shooting from behind the arc. The defense is allowing opponents to take too many 3s, especially in transition. Allowing any opponent to take 18 shots from behind the arc in the first half invites a hot streak that can completely upend a game.

This pattern becomes unsustainable when paired with the Bulls’ inability to produce 3-pointers at a high rate. They’re 25th in the league in made 3-pointers (10.4 per game) despite ranking 13th in accuracy (36.3%).

Tuesday’s win was a rare hot night for the Bulls from long range, as they finished 12 of 30. But if they can’t keep up that pace on a nightly basis, they’ll quickly be outpaced behind the arc.

3. Kevin Durant led the Nets as the Bulls fell behind in the first half again.

The Bulls struggled to contain Durant early, leading to another halftime deficit. Durant scored 14 points in the first quarter, then added six more in the second as the Nets led 58-52 at the break.

The deficit wasn’t as drastic as many the Bulls have faced this season, but it still forced them to come from behind. Durant quieted in the second half, scoring 12 points to finish with 32 and fumbling a pass for a turnover on one of the Nets’ last possessions.

4. Goran Dragić’s 3-point shooting kept the Bulls afloat in the first half.

Dragić matched his season high with 12 first-half points and finished with 15 — including 4-for-6 shooting from 3-point range — as he continues to provide a necessary boost off the bench.

Dragić’s production was limited in the second half after he took a hard elbow to the face from Nets forward Nic Claxton during a transition drive to the rim.

5. LaVine played the first game of a back-to-back.

Tuesday marked the first time this season LaVine started in the opener of back-to-back games. Despite a positive streak of games in which he said his left knee “felt good,” LaVine remains limited as the Bulls monitor his return after arthroscopic surgery in the summer.

Coach Billy Donovan previously said LaVine would not play on back-to-back nights in the early weeks of the season. The Bulls are scheduled to play four sets of back-to-backs in the first three weeks.

However, Donovan did not rule out LaVine’s availability against the Hornets on Wednesday during a news conference with reporters in Brooklyn before Tuesday’s game. If LaVine is cleared to play, it would signal another step forward in his return to full health after missing the first two games of the season.

6. Kyrie Irving was quiet on the court.

Days after inciting backlash throughout the league for promoting antisemitic conspiracy theories on social media and then defending his position, Irving didn’t score until the fourth quarter and finished with four points on 2-of-12 shooting (0-for-6 on 3s).

The controversy surrounding the Nets star dominated the spotlight before the game, drawing criticism from TNT hosts Shaquille O’Neal and Charles Barkley during the national broadcast.

The Bulls were missing two of their most important sparks off the bench with White (left thigh bruise) and Drummond (left shoulder sprain) sidelined.

White took a knee to the left quadriceps during Saturday’s loss to the 76ers and was held out as a game-time decision. Drummond injured his shoulder in a hard fall during Friday’s loss to the San Antonio Spurs. Neither injury is expected to be long term, according to Donovan.

The Bulls managed to outrebound the Nets 45-38 despite the absence of Drummond, who provided a quarter of the team’s rebounds before his injury.