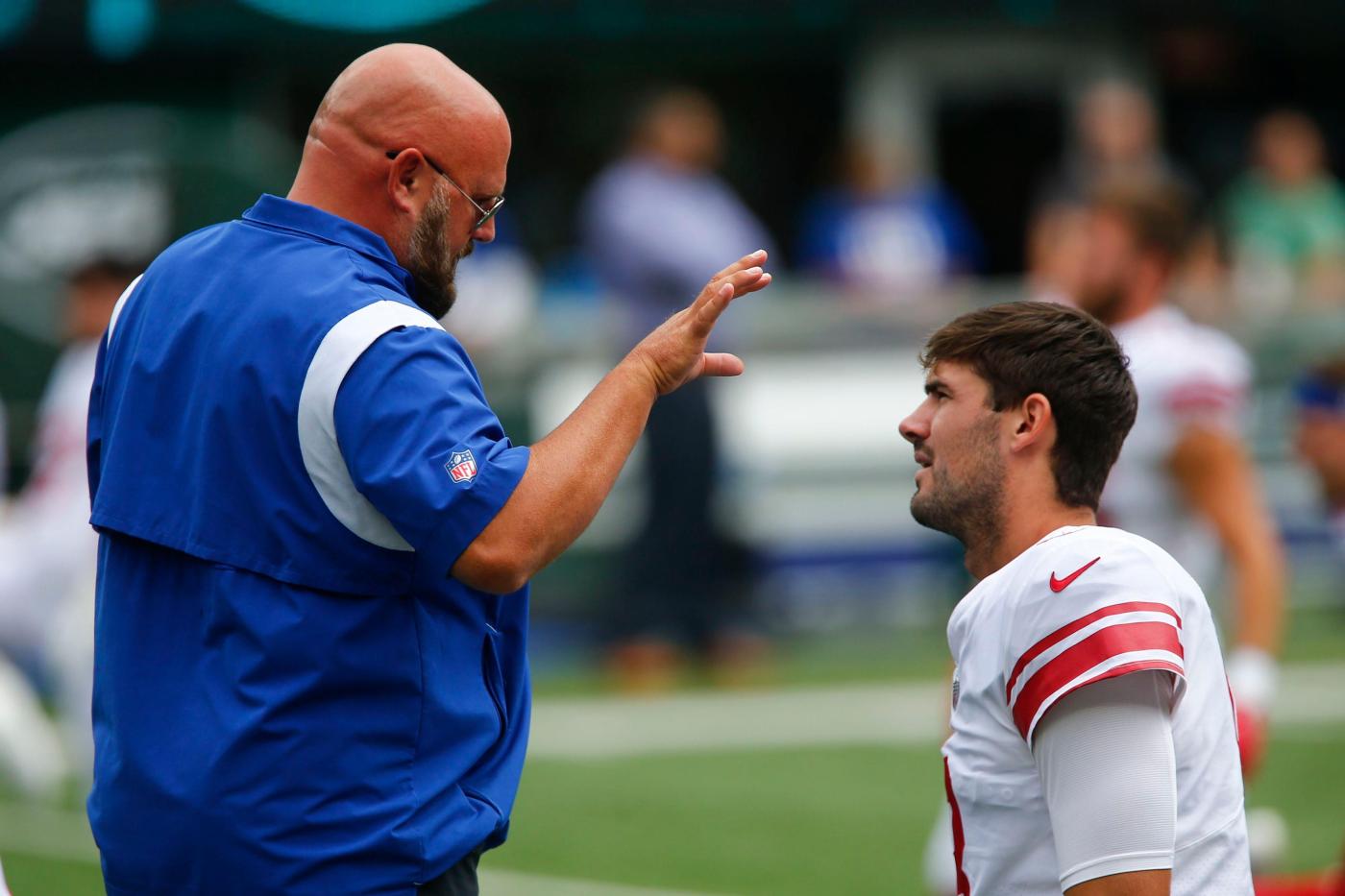 Everyone saw it. Brian Daboll was in Daniel Jones’ face after Sunday’s red zone interception in Nashville.

The head coach took his headset off, put his hands on hips, solicited feedback from Jones, then sounded off on the quarterback’s turnover.

Daboll gestured out to the field, maybe toward the scoreboard, as he went off.

“I think he was just communicating the costly mistake,” Jones said Wednesday after practice. “We can’t afford to do it. What goes on goes on in a game. There’s a lot of communication back and forth, so I understood it. Got to be able to move on.”

Jones is a big boy. He can handle hard coaching. The more interesting part of that interaction was how frustrated Daboll got after one bad Jones turnover in their first game together.

The obvious question is what it means for Jones’ job security in this do-or-die fourth NFL season with the team that drafted him No. 6 overall in 2019.

“Brian Daboll yelling at Daniel Jones, oh my gosh, you know, some people probably go, ‘Oh, you can’t do that. You’ll hurt their confidence,’” Simms said on SiriusXM’s Mad Dog Sports Radio. “Well, as I always tell you, if it hurts their confidence, they’re not the man for the job. So you gotta be honest to the players and that’s what he was doing. That was awesome.”

Former NFL GM Michael Lombardi, meanwhile, saw signs of a coach whose fuse is already short with a quarterback on the proverbial hot seat.

“I think [GM] Joe [Schoen] and Brian already know where they’re going with Jones,” Lombardi said on the ‘Talkin’ Ball with Pat Leonard’ podcast. “They’re not gonna come out and publicly say it. But you don’t walk over to a quarterback who you think is going to be your generational guy, who you’re building the team around, and basically reprimand him. You usually handle him with a bit little more … You go over there to tell somebody you’re managing how to handle the game.”

Giants offensive coordinator Mike Kafka said Daboll’s interaction with Jones demonstrated that “everyone’s holding each other accountable” on this team.

“We’re all in this thing together,” Kafka said. “So I think you gotta have those sometimes tough conversations. I think when Dabes [Daboll] does it in his way, that makes him special. That’s how Dabes gets the best out of players.”

Kafka said from his view, Daboll “kind of lit a fire under Daniel,” and the quarterback responded by helping to lead a 12-play drive to win.

“So I think it was effective in that respect,” Kafka said.

Daboll initially claimed in his postgame press conference that he “wasn’t talking to Daniel,” but the FOX broadcast clearly showed the coach taking his headset off and giving Jones a stern talking to.

Daboll eventually acknowledged that he said: “What’d you see?’

The coach said Jones told him “he thought he could potentially back shoulder it.”

Daboll said “that’s not what I saw,” and portrayed the rest of the conversation as the coach encouraging his quarterback to go get ‘em next time.

But Thursday, Daboll admitted he coaches tough, and not just when it comes to quarterbacks.

“I would just say there’s a certain standard we all are held accountable to,” Daboll said. “Myself, the coaches, the players. We’re all in this together.”

Jones admitted there was “emotion in a situation like that at the end of the game” and said, “it’s my job to understand it, listen to it and be able to respond.”

The quarterback has thick skin.

“He’s an emotional guy. He’s passionate and enthusiastic,” Jones said of Daboll. “I think that’s what makes him such a good coach. You’ve got to be able to take the coaching and move on. That’s part of [it].”

Clearly, the message is Jones can’t make a habit of these mistakes under Daboll.

Ex-NFL quarterback reveals why Tom Brady ‘p—-s’ him off