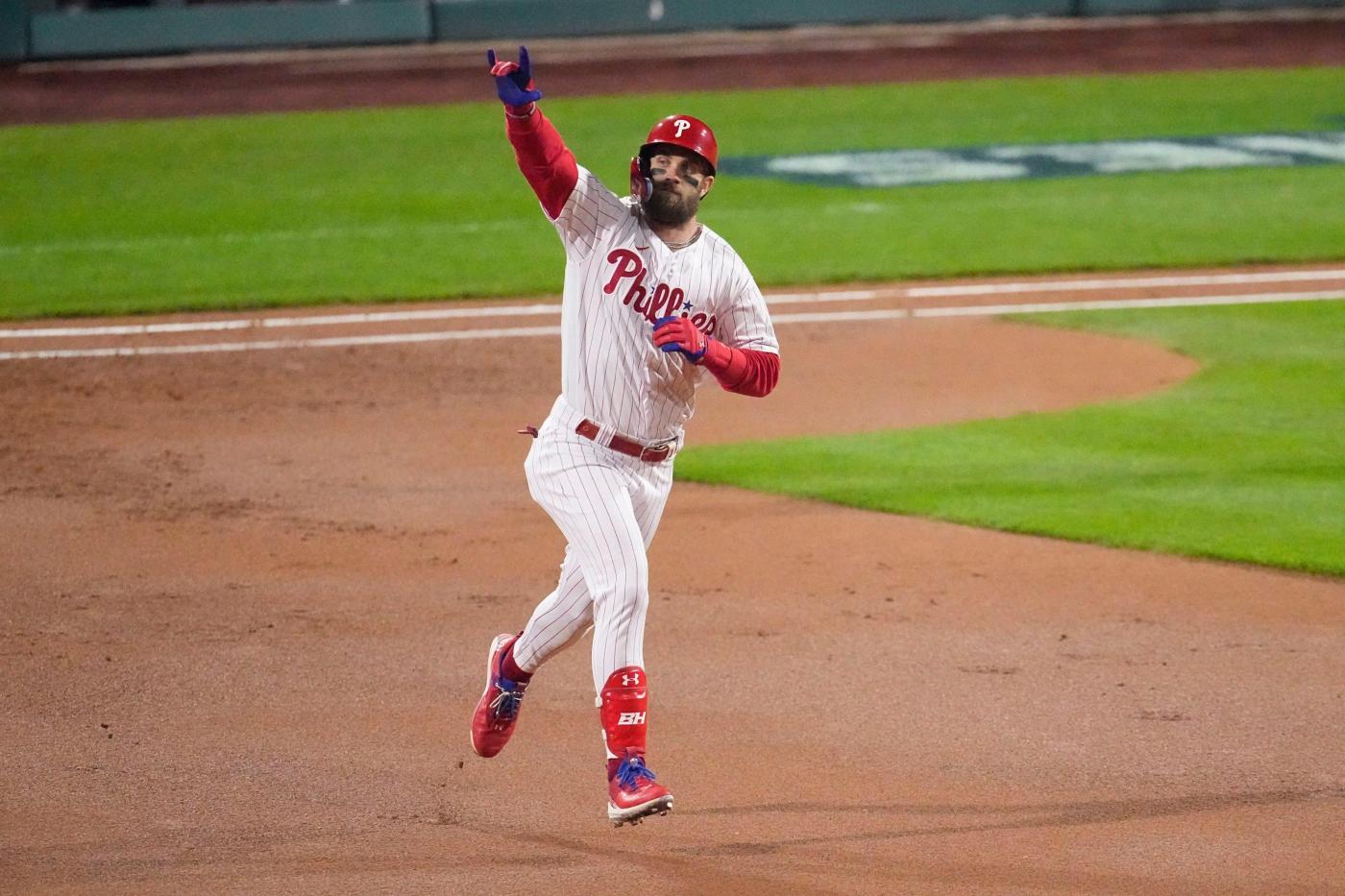 It has been evident for weeks now that these Phillies are not just a novelty act, not just a charity case let in the back door of the postseason, not just a group of rambunctious bros singing and dancing their way to the top.

They deserve to be in the World Series, and they’re certainly playing like it.

But in Game 3 on Tuesday night, the first World Series game in Philadelphia since 2009, the Phillies were carried to victory by several players who, at some point, probably thought they’d never be in this position, at least for this organization.

Bryce Harper was supposed to be a Yankee, or a Dodger, or perhaps go to one of the Chicago clubs. When he hit free agency after the 2018 season as the hottest thing smoking, many presumed that one of those teams would snatch him up. Harper wanted to play for the Yankees, a team that he grew up rooting for, just like so many baseball-obsessed children of the 1990s who grew up without a true hometown squad.

Instead, the Las Vegas native said he never got a call from the Yankees to offer him the jackpot of his dreams. General manager Brian Cashman liked his outfield at the time, riding with Aaron Hicks and Clint Frazier over the obscenely talented Harper. While the 2019 Yankees had a good season, they would have been better with Harper, just like they would have been in 2020, 2021, 2022 and beyond.

When Harper signed with Philadelphia, the World Series seemed like a distant fantasy for the moribund franchise. To not only get here, but to become an indelible part of the city’s sports history along the way, is to be the guy that every team should covet. He’s the Phillies’ now, and could be until his $330 million contract runs out in nine years, which looks like chump change with each iconic home run off his bat. Tuesday’s was a no doubter to get the scoring started, and Harper immediately shared some information with his dugout that appeared to help them launch dingers of their own, making him an impactful superstar in every sense of the word.

Ranger Suarez was optioned to the Phillies’ alternate training site on March 24, 2021, a week before the season began. He wasn’t recalled to the active roster until the beginning of May, as a reliever, and each of his first eight appearances came with the Phillies already losing. He was the mop-up guy, the anonymous long reliever, the guy who pitched because somebody had to. But in July, he ascended to Philadelphia’s unlikely closer, mostly because the rest of his teammates who tried it couldn’t get a grip on the role, almost like it was a greased lamp post outside Citizens Bank Park.

From July 1 through the end of the year, Suarez pitched 22 times and put 77 innings on his left arm. By August, he was too good to keep out of the rotation and made 12 starts down the stretch, including a complete game shutout in his penultimate outing of the season. He finished the year with the lowest ERA of any pitcher who completed at least 100 innings. Not only was Suarez’s ERA the best, his 1.36 mark was an entire run better than anybody else’s.

That’s the story of how Suarez became a starting pitcher in the major leagues, but sharing a rotation with All-Stars Zack Wheeler and Aaron Nola keeps Suarez a little more unknown. Teammate Noah Syndergaard, relegated to the bullpen, is much more famous than him. Hell, even right-hander Kyle Gibson — who had a 5.05 ERA in the regular season and has not started a game in the postseason — has made an All-Star team before and raked in $7 million this year to Suarez’s $730,000.

The point is, Suarez has never been a big name or even a guarantee to be on a big league roster. He’s totally here to stay now, which was clear to anybody who’s watched him for the last year and a half, but when the casual fans were introduced to him during his five scoreless innings in a pivotal Game 3, they saw an unflappable man who pitched with the quiet confidence of someone who always knew what they were capable of.

Alec Bohm hated Philadelphia. He said that himself, on the field, just four games into the 2022 Phillies’ wild ride. After owning up to it and winning the volatile, often self-hating fans back with his radical honesty, Bohm got his forever moment with the Philly faithful on Tuesday. When he bopped a second inning homer (the 1,000th in World Series history, by the way), those same fans who once made him question his whole existence became his 45,000 new best friends.

The former No. 3 overall pick whose clumsy defense threatened to leave him without a true position — and who still hasn’t quite hit as well as the Phillies would like — is now on the precipice of trading all that in for a World Series ring.

Brandon Marsh followed Bohm with a towering fly ball that had just enough juice to leave the yard, putting the Phils up 4-0 and cementing the feeling that they were absolutely not going to lose their first Fall Classic home game since the first Obama administration. Marsh was not supposed to be a power threat, and has never been a power threat, as indicated by his sub-.375 career slugging percentage. A few months ago, he was also not expected to be creating fireworks for the Phillies in the World Series, both because he was playing in Anaheim, and the Phillies never have a good center fielder.

Since 2013, the first year after Shane Victorino left, the Reds are the only National League team to get fewer Wins Above Replacement from their center fielders than the Phillies. The best center fielder they’ve had in that time is Odubel Herrera, whose 99 wRC+ tells us that he was also, by definition, a below average hitter. Marsh is already fourth on that list despite playing just 41 regular season games. The group is a who’s who of failed experiments and placeholders, ranging from John Mayberry and Roman Quinn to Adam Haseley and Luke Williams.

Picked up from the Angels to shore up the Phillies’ outfield defense, Marsh’s long ball was yet another example of how improbable ideas come to life in October, as a guy who looks like a swamp creature and primarily bats ninth in the order has been a bigger factor than Houston’s titanic slugger Yordan Alvarez.

Added offense from Kyle Schwarber and Rhys Hoskins put the game away, but that barrage in the early innings plus Suarez’s pristine pitching was how Game 3 was won. The misfit cliche gets overused this time of year when an underdog challenges the consensus favorite, and while it does sort of apply to the Phillies, watching them squeeze every iota of life out of the Astros on Tuesday made one thing very clear.

This roster fits very well with each other, and if you aren’t careful, they’ll hang a touchdown on you.