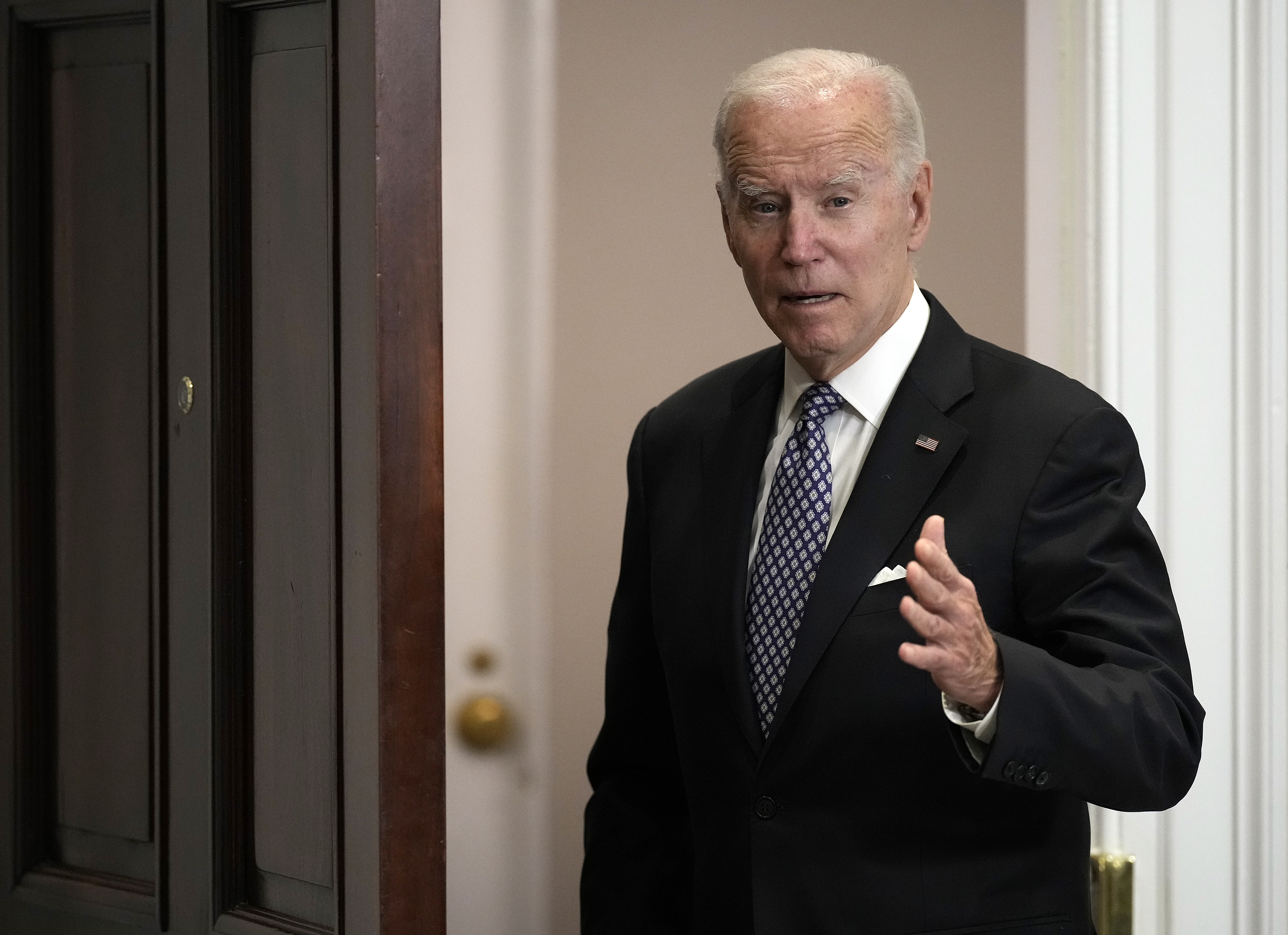 President Joe Biden on Monday accused oil companies of “war profiteering” as he raised the possibility of imposing a windfall tax on energy companies if they don’t boost domestic production.

Biden in brief remarks criticized major oil companies for making record-setting profits while refusing to help lower prices at the pump for the American people. The president suggested he will look to Congress to levy tax penalties on oil tax companies if they don’t begin to invest some of their profits in lowering costs for American consumers. The president issued the warning just days before the Nov. 8 midterm elections.

“My team will work with Congress to look at these these options that are available to us and others,” Biden said. “It’s time for these companies to stop war profiteering, meet their responsibilities in this country and give the American people a break and still do very well.”

Biden took aim at one company, ExxonMobil, that reported $19.7 billion earnings in the third quarter alone. He lashed at the Irving, Texas-headquarter company for using record profits to provide shareholders with hefty dividends and stock buybacks but failing to invest in production improvements that would benefit consumers at the pump. Another oil company, Chevron, had $11.23 billion in profits in the third quarter, almost reaching the record profits it attained in the prior quarter.

Over the last two quarters, ExxonMobil, Chevron, Shell, BP, ConocoPhillips, and TotalEnergy earned over $100 billion in profits—more than they earned all of last year, and more than two-and-a-half times what they earned in the same quarters of 2021.

“Oil companies. record profits today are not because of doing something new or innovative,” Biden said. “Their profits are a windfall of war, a windfall for the brutal conflict that’s ravaging Ukraine and hurting tens of millions of people around the globe.”

High prices at the pump have exacerbated inflation and have taken a toll on Biden and Democrats’ standing among voters.

Congress would have to approve any additional taxes on the energy producers — which would be a tall order in the current Congress where Democrats have narrow control of the House and Senate, and even less likely should Republicans retake one or both chambers on Nov. 8.

Americans have struggled with painfully high gasoline prices in recent months, paying more than $4.80 on average for a gallon of regular at the beginning of July, according to AAA. They’ve since fallen to $3.76 on average nationally, but the White House says they should be lower, given declines in global oil prices over the same period.

“Can’t believe I have to say this but giving profits to shareholders is not the same as bringing prices down for American families,” Biden tweeted on Friday.

Biden has been critical of energy companies profits since at least June, when he complained publicly that “Exxon made more money than God this year.”

Biden’s threat of windfall taxes on energy companies follows calls by progressive Democrats, including Bernie Sanders and Elizabeth Warren, for such a proposal.

And last week, California Gov. Gavin Newsom called on Congress to tax the profits of oil companies. “Crude oil prices are down but oil and gas companies have jacked up prices at the pump in California. This doesn’t add up,” Newsom said on Friday. “We’re not going to stand by while greedy oil companies fleece Californians. Instead, I’m calling for a windfall tax to ensure excess oil profits go back to help millions of Californians who are getting ripped off.”

The Democratic-controlled House passed a bill in May authorizing the Federal Trade Commission to punish companies that engage in price gouging and adding a new unit at the FTC to monitor fuel markets. The bill has stalled in the Senate. A related measure by Senate Commerce Committee Chair Maria Cantwell, D-Wash., has not come to the Senate floor for a vote.

“This is exactly the type of leadership we’ve been waiting for from President Biden,” said Jamie Henn, spokesperson for the group ‘Stop the Oil Profiteering.’ “Big Oil has made nearly $300 billion in excess profits this year by gouging us at the pump. A windfall profits tax can provide immediate relief by redirecting that money into the pockets of hardworking Americans.”

Industry groups have condemned the prospect of a windfall tax, with American Exploration & Production Council CEO Anne Bradbury saying it “would likely backfire by further driving up energy costs for American families and businesses.”

“Rather than taking credit for price declines and shifting blame for price increases, the Biden administration should get serious about addressing the supply and demand imbalance that has caused higher gas prices and created long-term energy challenges,” said Mike Sommers, president and CEO of the American Petroleum Institute. “Today, the President is proposing to raise taxes on the U.S. natural gas and oil industry that is competing globally to produce the fuels Americans need every single day. Oil companies do not set prices—global commodities markets do.”

Heartstopper’s Kit Connor Felt Forced to Come Out as Bisexual

How To Use The 2023 Recession To Get Rich

Retail credit card APRs are on the rise. Should you get one anyway?