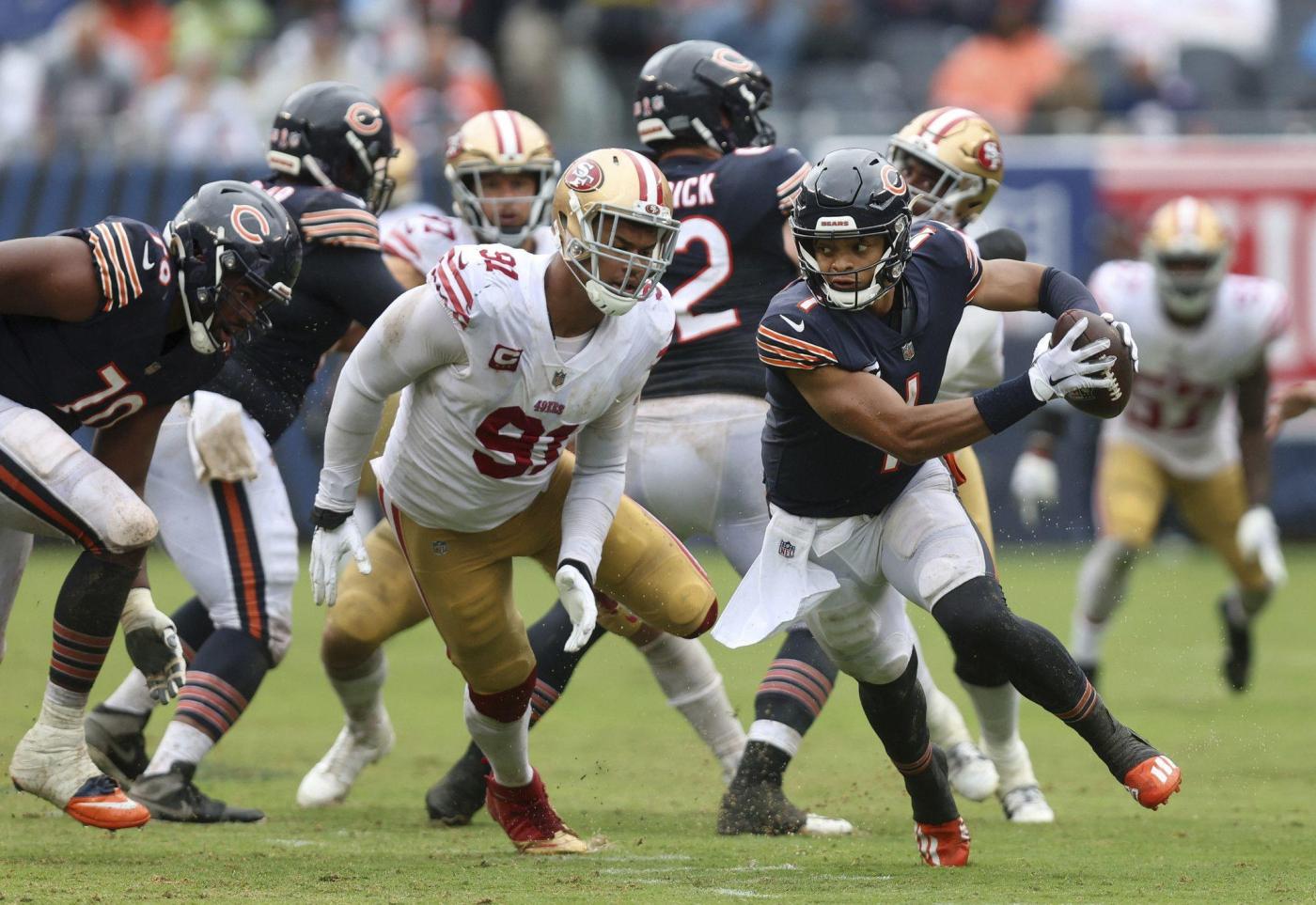 Before the Chicago Bears’ biggest gain in Sunday’s 19-10 upset of the San Francisco 49ers, their offense was out of rhythm. Disjointed. Stuck.

The Bears didn’t cross midfield until 2 minutes, 48 seconds remained in the second quarter. They didn’t score on their first six possessions. They didn’t complete a pass beyond the line of scrimmage until their second play of the third quarter. And on their first 34 plays during a wet and sloppy afternoon, they averaged 2.2 yards.

A beauty pageant this was not.

Then came the magic moment. Third-and-long from their 49-yard line deep into the third quarter. Justin Fields took a shotgun snap but was quickly surrounded after both offensive tackles were beat. Less than two seconds into the play, playground chaos erupted.

Fields escaped with a spin to his left, used his speed to buy time, then settled at his 40 when he spotted Dante Pettis as the lone body in a sea of green.

“I was just supposed to sit there in the zone,” Pettis said. “But I broke back out because there was nobody there. … When I saw Justin set up to throw to me, I was like, ‘OK. Let’s go.’ The ball felt like it was in the air forever.”

Fields threw a high-arcing pass back across the field to the most open receiver he might ever see. Pettis did the rest. The final 30 yards on the 51-yard touchdown pass came after the catch, an untouched sprint across Soldier Field’s south goal line.

“That was the play that changed the momentum of the whole game,” Fields said.

Added Pettis: “We definitely felt that.”

That touchdown wasn’t by design. Far from it. And the Bears offensive performance as a whole was, to put it nicely, far from pretty.

The Bears averaged 2.7 yards per rush while netting only 105 passing yards. You might not find another NFL team all season that sputters like that offensively yet leaves the stadium with a two-score win.

But football can be a quirky game. Sometimes it’s as much about well-timed breaks, improvisational playmaking and taking advantage of an opponent’s mistakes as anything else. And as these Bears look for catalysts to accelerate their growth, perhaps they will find fuel in their ability to hang around in games, to limit game-changing errors, to remain mentally steady through prolonged struggle and to hit a few momentum-shifting big plays.

The Bears’ first touchdown of the season could prove symbolic for the mission the organization faces. When things are a mess, just try to make something happen.

If the touchdown pass to Pettis helped unlock the offense, Fields’ 18-yard scoring strike to Equanimeous St. Brown with 12:45 remaining gave the Bears control of the game. It provided their first lead of the season — one they wouldn’t relinquish.

The play was designed to be a play-action pass in the flat to fullback Khari Blasingame. Yet the mechanics of the play put the 49ers defense in conflict and gave Fields options.

The Bears quarterback sold his play fake to running back David Montgomery, sucking the defense up. Then with Blasingame blanketed to the right, Fields moved to St. Brown as his second read on a corner route.

Wide receiver Byron Pringle also was wide open and would have had a walk-in touchdown had Fields made it that far in his progression. Fields said Pringle was his fourth and final read, though, and when he recognized the sharp angle St. Brown had found to gain separation from safety Talanoa Hufanga, the rest was easy.

“I just hit him for the touchdown,” Fields said.

With touchdowns on back-to-back possessions, the Bears had momentum with a charge of energy pulsing through Soldier Field.

On the bright side

As the Bears claw to stay competitive this season, they have to take care of the ball consistently while also limiting penalties. To that end, the offense was impressive Sunday. It turned the football over just once, on a woeful Fields interception in the first quarter — more on that shortly — and committed only one penalty, an intentional delay-of-game infraction with 2:37 remaining that the 49ers declined.

Other than that? Nothing. Not a single false start. No holding violations. No ineligible men downfield.

When Eberflus talks about establishing a foundational floor, he is emphasizing his players’ ability to play with maximum effort and supreme focus. Those are qualities that will give this team a chance and keep morale steady when things aren’t clicking.

That was another notable element of Sunday’s game. Even after a miserable first half offensively, the Bears never seemed like they were pressing.

That’s a credit to Fields’ mental toughness and the way his calm confidence steadies those around him.

Pringle spent his first four seasons in Kansas City and likened Fields’ contagious composure to that of Patrick Mahomes.

“I loved his composure throughout the game, from the first (quarter) to the fourth,” Pringle said. “He knew it was four quarters we have to play, not just one half.”

Bears fans know as well as anyone it can be incredibly difficult to pull a struggling quarterback out of a funk within a game. Fields perhaps has different DNA in that regard.

“That’s just being a pro, that’s being a vet,” Pringle said. ‘That’s a big leap — especially for a second-year player. I know you’ve probably seen other players pout or get down or point fingers behind closed doors. But he just kept his composure and was able to lead the offense and orchestrate it the correct way.”

Fields’ interception was a real no-no, a misguided throw forced into heavy traffic on third-and-7 and easily picked off by poaching safety Hufanga.

Fields was targeting Darnell Mooney and explained after the game that against the 49ers’ “vision-and-break” defense, he was focused on steering linebacker Fred Warner with his eyes to the right toward St. Brown, who ran a hook route. But Fields failed to hold or steer Hufanga, who made a decisive break on the pass and had an easy pick.

“I’ve got to read the squeeze off of that and just make a better decision,” Fields said.

Tight end Cole Kmet happened to be open 3 yards short of the line to gain, but Fields didn’t recognize Kmet as his best bet until after the fact. That’s the kind of error the second-year quarterback is vowing to eliminate as he conditions himself to better understand his risk-reward calculus in the NFL.

While the league’s best quarterbacks make their money on third down and inside the red zone, Fields also is growing in his understanding of batting averages at this level.

In Sunday’s postgame media session, he noted that a third-down conversion rate of 48% is often good enough to lead the league or at least be near the top.

“So I’ve just got to not force anything down the field,” Fields added. “Boom. Just take the check-down (to Kmet) and maybe he catches the ball before the sticks and breaks a tackle and gets the first down. I’ve got to be smarter and, of course, just know who I’m playing and just take the odds.”