LDS Church is under fire in Australia 
(RNS) — Australians are angry about new reports that have surfaced over the last few days, claiming the Church of Jesus Christ of Latter-day Saints has done an end run around the Australian government.

As “60 Minutes Australia” reported, it stands accused of “lightening the pockets of the Australian tax office by $400 million.” (That is AU$400 million, which would be just shy of U.S. $256 million in today’s currency conversion.)

The introduction to the “60 Minutes” report goes on to say, “The church’s members claim very generous tax benefits in Australia while other religions go without.”

Of that 58,000 who say they are members, a smaller number can be expected to be “active” in the church, which includes the ideal of tithing 10% of income.

It’s what has happened to those Australian members’ tithing money that is the subject of current scrutiny.

The opening of the “60 Minutes” segment doesn’t inspire a great deal of confidence in its accuracy about Mormonism as a whole. One early sequence shows a white-shirted missionary heading to a doorbell all alone (where is his companion?) while gospel music plays in the background (I only wish we had such powerful and uplifting worship music in the LDS Church). It claims “Mormons are required to hand over 10% of their income,” which makes it sound like there is no choice involved and that every single member coughs up a full 10% of their income in tithing just for the privilege of sitting in the pew.

All of that is just within the first four minutes of the 19-minute investigative segment. It’s an inauspicious beginning: If the reporters did not manage to get these basic facts right about the LDS Church, what did they get wrong about its alleged financial mismanagement?

From there, though, the report stops trying to make under-researched generalizations about the religion and turns to the specifics of how the church has conducted itself financially in Australia.

A team from the Sydney Morning Herald, the Canadian Broadcasting Company and The Age has been investigating the church in Australia for months, with the first of the stories coming out in April. The last few days have brought a fresh round of revelations.

The reports are stating that the LDS Church created a “charitable trust fund” and directed Australian Saints to send their tithing and other donations to that trust fund rather than to the church itself. They could then claim the tax exemption for contributing to a charity.

But if I am understanding it correctly, Australian law then requires the registered charities to distribute much of that money within Australia and to have that distribution overseen locally, with all decisions made by Australians who run the charity from within the country.

Instead, what appears to have happened is that Australians’ tithing dollars got centralized in Salt Lake City under the larger umbrella of the denomination’s charitable arm, which then disbursed the funds as it wished to.

The website of the Australian Charities and Not-for-Profits commission lists the “L.D.S. Charitable Trust Fund” as a registered charity in Australia, reporting in November of 2021 that it had received AU$100,211,557, more than 99% of which was from donations and bequests. Of that, it spent AU$7,810 for charitable purposes and reported no employee salaries or other expenses.

As The Age put it,

LDS Charities Australia has no paid staff, Australian website, expenses or infrastructure to run what purports to be one of the country’s major charities, collecting more in individual donations than Oxfam, Beyond Blue or Caritas Australia, the Catholic Church’s international aid charity. 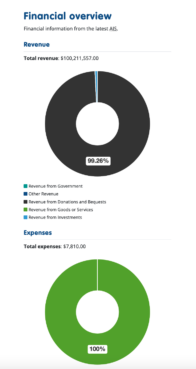 The church says it has done nothing wrong, and it’s possible that what it has done will turn out to be legal. That’s what has happened in Canada, where the church is also under investigation for its use of members’ tithes. The CBC reported last week that the “Mormon Church in Canada moved $1B out of the country tax-free—and it’s legal.”

The loophole in that case is that Canadian members’ tithing, which apparently amounted to nearly $100 million last year alone, went to three Brigham Young University campuses. And since BYU enrolls hundreds of Canadian students each year, this is considered a legitimate use of the funds, because the money is (at least indirectly) benefiting the lives of some Canadians.

I’m sure the Australian case will continue to draw scrutiny, and it should. While I’m not persuaded that the investigative reports have all the facts, and I’m open to hearing the church’s explanation, the reporters’ basic story is consistent with the numbers that the Australian government is reporting on its website.

This kind of financial practice looks terrible for the church. It feels covert and deceptive. Creating a “charity” that appears to be in name only is unfair to other religions in Australia that have played by the rules. It’s unfair to the Australian government, which has been shortchanged millions in taxes. And it’s unfair to those tithe-paying Latter-day Saints Down Under who had a right to assume their tithing was going where it was supposed to.

How persuasive is whistleblower’s claim that the LDS Church is hiding wealth from the IRS?

I just paid my Mormon tithing. Why don’t I feel better about it?

Covid: US to lift travel ban for fully jabbed on 8 November – BBC

Our Google Pixel 7 video review is now up

Vatican Swiss Guard slayings back in spotlight with new book