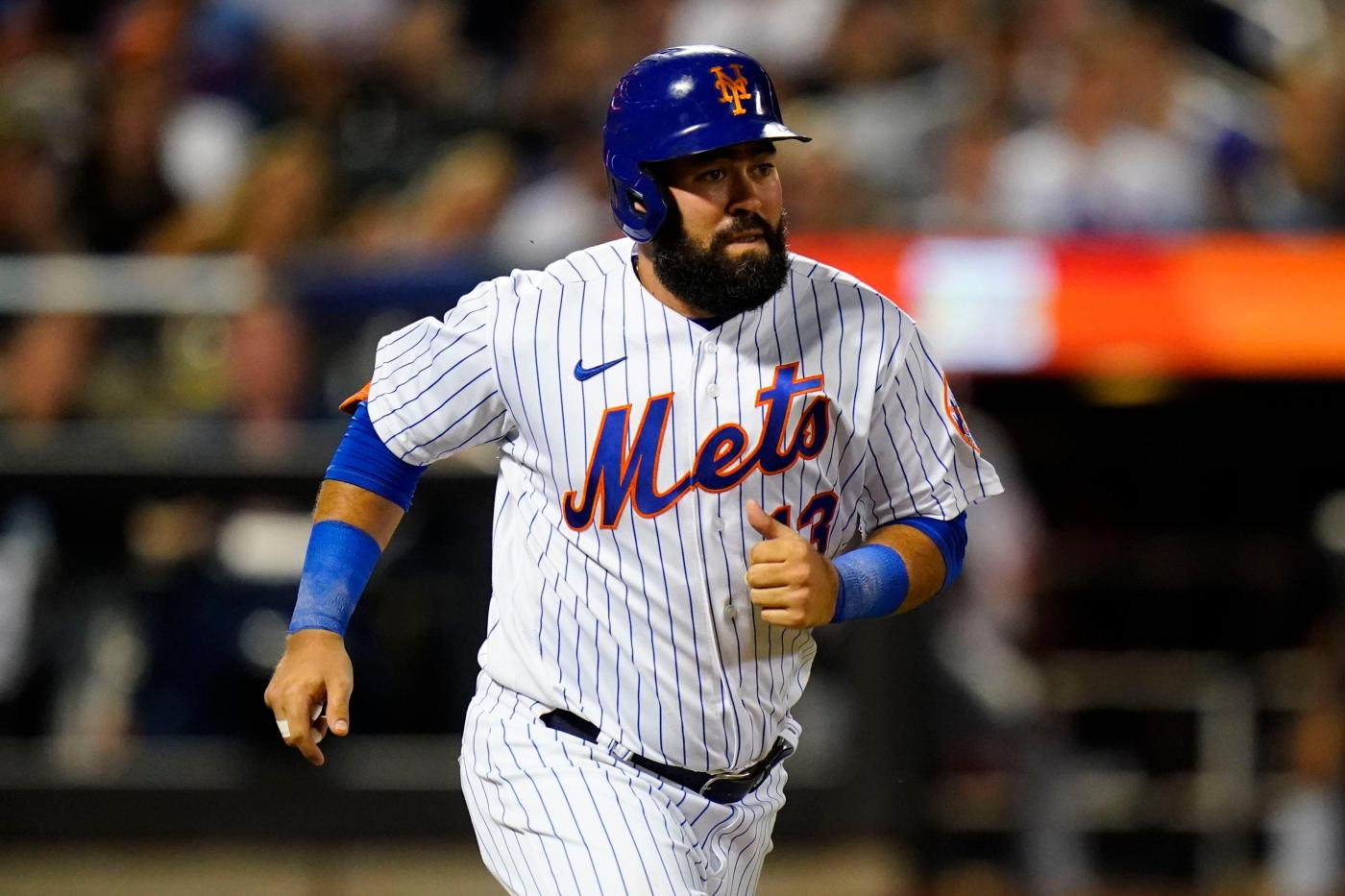 The Mets are getting whole again.

Luis Guillorme is back with the Mets for Monday’s game and was added to the active roster again, though he was not in the starting lineup. Guillorme missed nearly a month with a moderate strain in his left groin, which he sustained on Aug. 14.

“We had some guys do a good job in his absence, but there’s a lot of things he brings,” Buck Showalter said of Guillorme. “One of the things you talk about with players when they’re on your club, or you’re trying to acquire them, is do they make their teammates better? Having Luis here kind of gives us a nice safety net in a lot of places.”

Guillorme has played every infield position this season except for first base. His absence led the team to call up infielders Brett Baty and Deven Marrero in mid-August. Baty dazzled in his first game but then fell into predictable rookie struggles before hurting his thumb. Marrero, always more of a “just in case” player than an actual part of the team’s long term plans, made just six plate appearances for the Mets this year. He did not record a hit. As part of the roster moves to welcome Guillorme back, Marrero was designated for assignment.

In his 86 games pre-injury, Guillorme was putting together the best season of his career. He hit .283 with a .355 on-base percentage. Guillorme is also the only Met (minimum 250 plate appearances) to draw a walk in at least 10% of their plate appearances.

“We’ve missed him, so we’re excited about having him back,” Showalter said.

Headed into the crunchiest part of crunch time, the Mets will now once again have the services of one of their most patient hitters and arguably their best defensive infielder as well. Though Eduardo Escobar has been swinging a magic wand for the last two weeks, he still struggles mightily against right-handed pitching, a group that Guillorme is hitting .304 against. Should the Mets lock up their playoff positioning early, having Guillorme back also allows them to rest Francisco Lindor or Jeff McNeil if they so choose.

“One thing Billy [Eppler] and the front office have been adamant about is making sure that we keep the versatility and people being able to move around if there’s a need,” Showalter said.

In Monday’s other roster move, Trevor May was reinstated from the injured list. The late-inning reliever was stricken with COVID-19, which sent him to the IL on Sept. 3. Bryce Montes de Oca, the rookie pitcher whose sinking fastball comes with extra mustard on it, was placed on the injured list with left hamstring tightness.

May told reporters on Monday that he stayed in shape by turning his couch over, covering it with blankets, and using it as a pitching net. He joked that he’d have to throw 160 miles per hour to put a hole in this apparently indestructible piece of furniture. Showalter was asked what the plan is for using May, whose last game was on Sept. 1.

“You’d like to give him time to ease in but the game doesn’t always cooperate,” Showalter said.

There are players who are beloved by their teammates, then there’s Escobar.

“He has a way of energizing the dugout,” Showalter said lovingly.

The player with perhaps the highest approval rating in the Mets’ clubhouse, unfortunately, has also been one of their biggest liabilities. Not counting the 60-game shortened season in 2020, Escobar has his lowest batting average, on-base percentage and slugging percentage since 2016. But entering Monday, he had a .452 batting average in his last 12 games, going 19-for-42 with five homers and nine RBI. His manager thinks that’s a sign of a player naturally getting right, even though in Escobar’s case it took him nearly the entire season.

“I’ve said many times, sooner or later guys kind of seek their level,” Showalter explained. “Unfortunately, sometimes that comes in spurts. It’s a hard game to be real consistent in.”

This current hot streak came directly on the heels of an 0-for-10 slump that was also interrupted by a finicky oblique.

“He’s making up some ground,” said Showalter, who suggested that the clubhouse has been a safe haven for Escobar amid his personal struggles. “He’s trying to make some people feel the pain he felt during the first half of the season.”

TALES FROM THE SKIPPER

In 1977, with his Yankees in a funk, manager Billy Martin famously made his batting order by drawing names out of a hat. Showalter hasn’t had to do that yet, but he did tell a story about a different method of lineup construction that he’s been forced into a few times.

“I’ve been in situations where I’ve had to make the batting order from nine up,” he said. “‘Well I know he’s hitting ninth. He’s gonna hit eighth.’ Then you see what you’ve got left over.”

With Starling Marte on the mend, Showalter has had to play around with the top of his lineup for the first time as Mets’ manager.

“This is kind of the other way around,” Showalter said thankfully. “Francisco’s lack of ego where he hits, and his versatility to bring what a lot of spots need, has made it easy on me and us.”