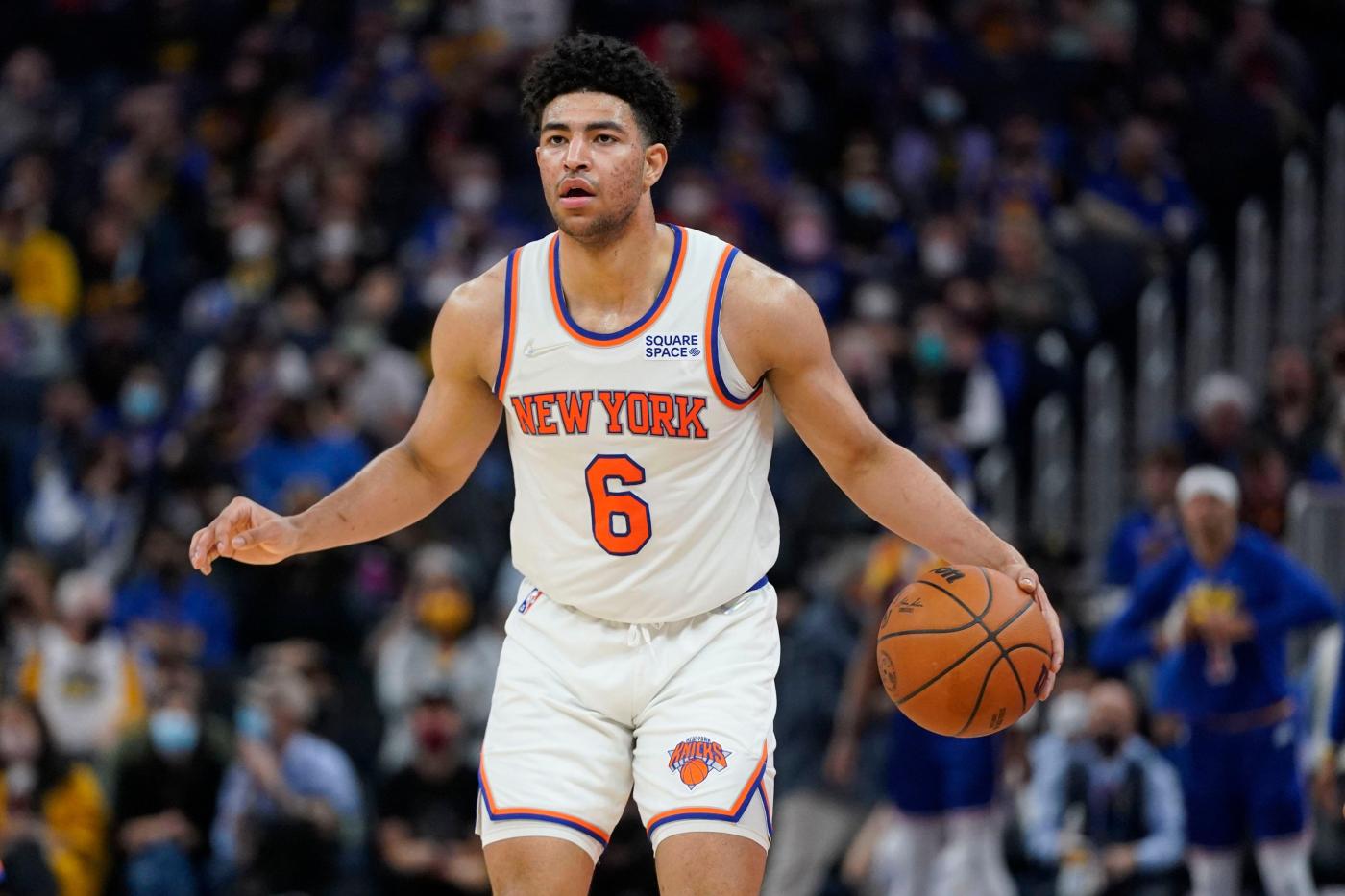 Quentin Grimes is finally back.

One of the Knicks top perimeter defenders was removed from the inactive list for the first time this season Wednesday night, logging five scoreless minutes of garbage time as Tom Thibodeau eases Grimes back into the rotation.

“Just let him inject energy, let him see where he is,” Thibodeau said after the Knicks lost to the Hawks, 112-99. “So I thought he gave us some pretty good minutes.”

Before the game, Thibodeau labeled Grimes’ status as “situational,” which is Thibodeau’s code word for very few minutes.

“I think a lot of it is situational. So if your matchup is a guy off the dribble, he’s good at that,” Thibodeau said. “He’s also very good at catch-and-shoot, locking and trailing people, staying attached. So he’s got great feet, he’s got anticipation, he’s got strength, so I think that’s what makes him such a good defender. He doesn’t take any plays off. Full speed all the time.

“Obviously he missed a lot of time,” Thibodeau added. “So he’ll be situational to start.”

Grimes missed the opening six games — and three of the four preseason contests — because of a sore left foot, an ailment that had him listed as day-to-day for over a month.

The wing player, who was drafted 25th overall by the Knicks in 2021, re-aggravated the injury while playing 16 scoreless minutes in preseason and, according to the Knicks, only returned to full practice this week.

Injuries have been the biggest concern of Grimes’ young career, with only 46 of 86 games played heading into Wednesday. But Thibodeau is a fan.

“Two-way player. Very competitive,” the coach said. “I think shooting the 3 is a strength, but his ability to guard really three and sometimes four positions. But he’s a fierce competitor, and we need that.”

Now Grimes’ return opens questions about the rotation, specifically whether Cam Reddish will continue to log minutes as the backup shooting guard.

Reddish was thrust into the rotation because of Grimes’ injury and played well in the opener in Memphis, where he exploded for 22 points off the bench. But Reddish wasn’t productive in consecutive game against the Bucks and Cavs, as the Knicks’ defense continued to bleed points.

Reddish, who was questionable before Wednesday’s game because of an illness, scored six points in 15 minutes. Since the Knicks didn’t extend his contract, Reddish will become a restricted free agent after the season and theoretically minutes could boost his trade value.

Coincidentally, Reddish faced the team Wednesday — the Hawks — that traded him to the Knicks last season.

“It’s all about opportunity,” Hawks coach Nate McMillan said. “They have a lot of players, really good players. Far as what I see he’s getting an opportunity and he’s trying to make the most of it.”

Timberwolves down Memphis to get over .500 for first time in more than a month – Twin…