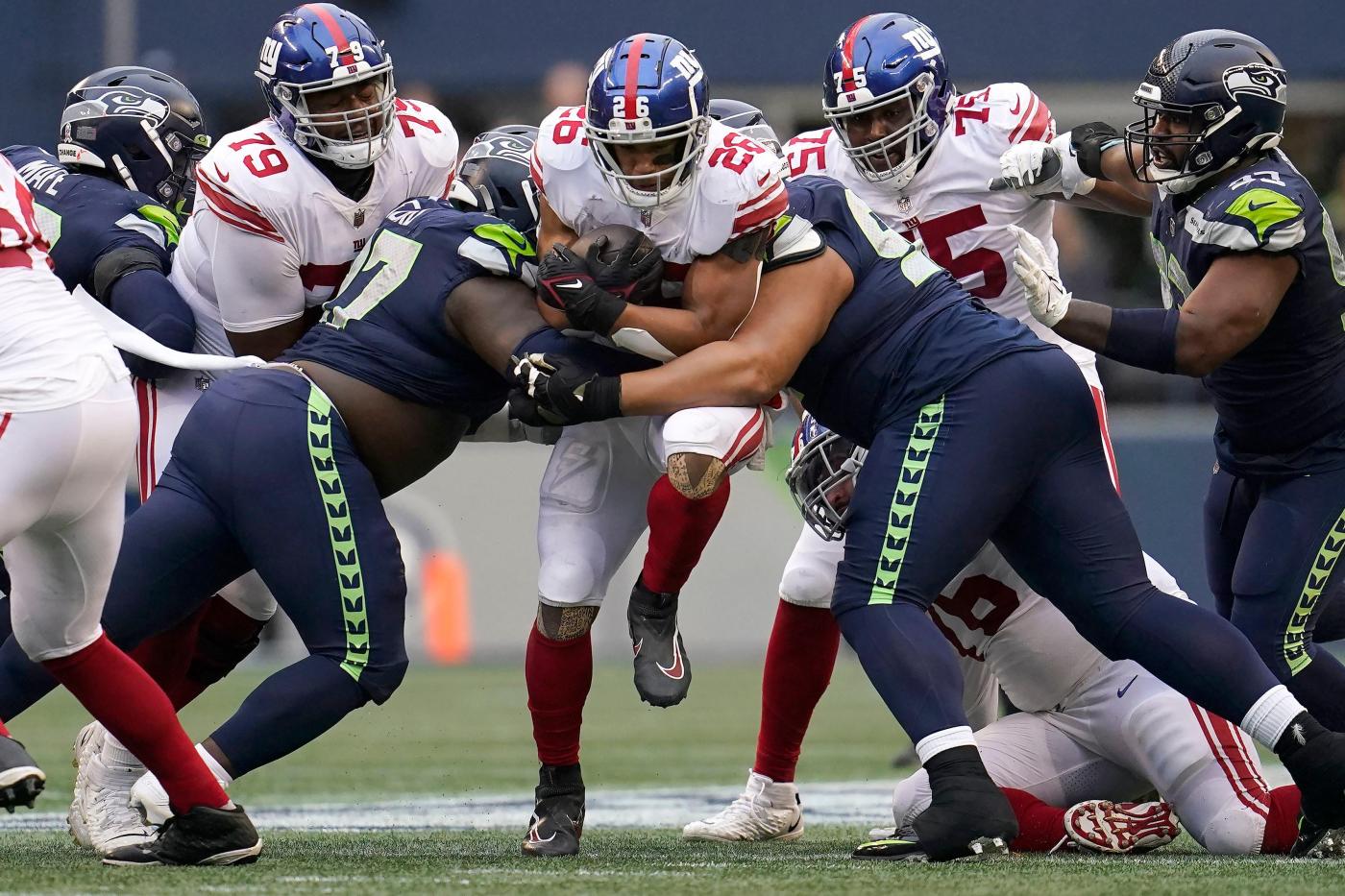 The Giants were coming off their franchise’s first-ever game with their quarterback and running back going over 100 yards on the ground.

Yet it took Brian Daboll and offensive coordinator Mike Kafka seven offensive snaps to hand the ball off to Saquon Barkley in Sunday’s 27-13 loss to the Seattle Seahawks.

Daboll said there were a couple run-pass option calls on the Giants’ opening two drives, and the Seahawks defense dictated pass.

“There were some RPOs in there that Mike called that they took away the run,” Daboll said. “So we threw a quick out to Slayton or we hit a slant to 17 [Wan’Dale Robinson].”

But Kafka also play-actioned Jones twice from under center and had clear passes called on both 3rd and 4s. It just felt like the Giants overthought the early game plan, rather than trying to set a tone with their bread and butter.

Right tackle Tyre Phillips’ first of two false starts bumped them back to 3rd and 9 on the second drive into an obvious passing situation, as well. That was another problem: the Giants committed six penalties to the Seahawks’ three.

“Give Seattle credit,” Daboll said. “They did everything better than we did today.”

Even when the Giants started running the ball, of course, they struggled to find room.

Barkley finished with 20 carries for a season-low 53 yards and a 1-yard TD, plus nine yards receiving on three catches.

“They made plays,” Barkley said. “They made more plays than us. We’ve just got to be a little bit better.”

Pete Carroll’s defense also was more attentive to Jones’ naked bootlegs and scrambling. The Giants’ QB managed only 20 rush yards on six carries. The offense averaged only 2.8 yards per carry.

Obviously, Daboll and Kafka have done a masterful job this season with the roster they have. Any criticisms must be couched with the talent at their disposal. And the strategy of starting pass, while the defense keys on the run, had worked in Jacksonville.

But on this day, it hurt the offense in such a hostile environment that the Giants didn’t lean on their strength out of the gate.

NO FOCUS ON DEADLINE AFTER LOSS

“It’s just after a game here,” he said. “My focus is really not happy with the outcome today.”

Jones had a similar response.

Carroll accidentally bumped referee Jerome Boger on the sideline in Sunday’s fourth quarter, drawing an unsportsmanlike conduct penalty. But Boger’s call on the penalty was the memorable moment.

“The coaching staff of the Seattle Mariners was in the restricted area,” Boger announced of his sideline infraction.

Carroll laughed postgame when he heard Boger had called the Seahawks the Mariners by accident.

“No way,” Carroll said with a smile. “Awesome. Gotta get a little hit and run.”

Offensive lineman Nick Gates played five offensive snaps in his triumphant return to an NFL game 409 days after his horrific left leg fracture in Week 2 of last season in Washington.

“It sucks we lost, but it was a little moral victory for me,” Gates said.

Gates underwent seven surgeries and never knew if he’d play football again. But on his first snap back, he blocked the Seahawks’ Bruce Irvin as a jumbo tight end to help Barkley score his 1-yard TD.

Gates laid on his back, pumped his fists and kicked his legs with joy as Barkley scored behind a formation with seven offensive linemen.

“So much respect to him and how hard he’s worked,” Jones said.

Brian Daboll said the Giants’ players will come into the facility on Monday, then he’s giving them off the rest of the bye week … There were some noticeable differences in personnel on defense: CB Nick McCloud started at slot corner and played 33 defensive snaps, and rookie LB Micah McFadden (26) played more snaps than Tae Crowder (21), while Jaylon Smith (52) manned the middle of the field and rarely came off … Defensive tackle Nick Williams left Sunday’s game in the first half with a biceps injury and did not return. Punt returner Richie James was carted off the field and diagnosed with a concussion after his second lost fumble of the game in the fourth quarter. Rookie left guard Josh Ezeudu was checked in the medical tent in the first quarter but stayed in the game. Leonard Williams went down in the second quarter and received a look from the trainers during the Seahawks’ first touchdown drive. But he missed one play — DK Metcalf’s 3-yard TD catch — and then returned for the extra point.

DOWN MEN ON OFFENSE

Markets close out a positive week ahead of Big Tech earnings