The next abortion fight could be over wastewater regulation 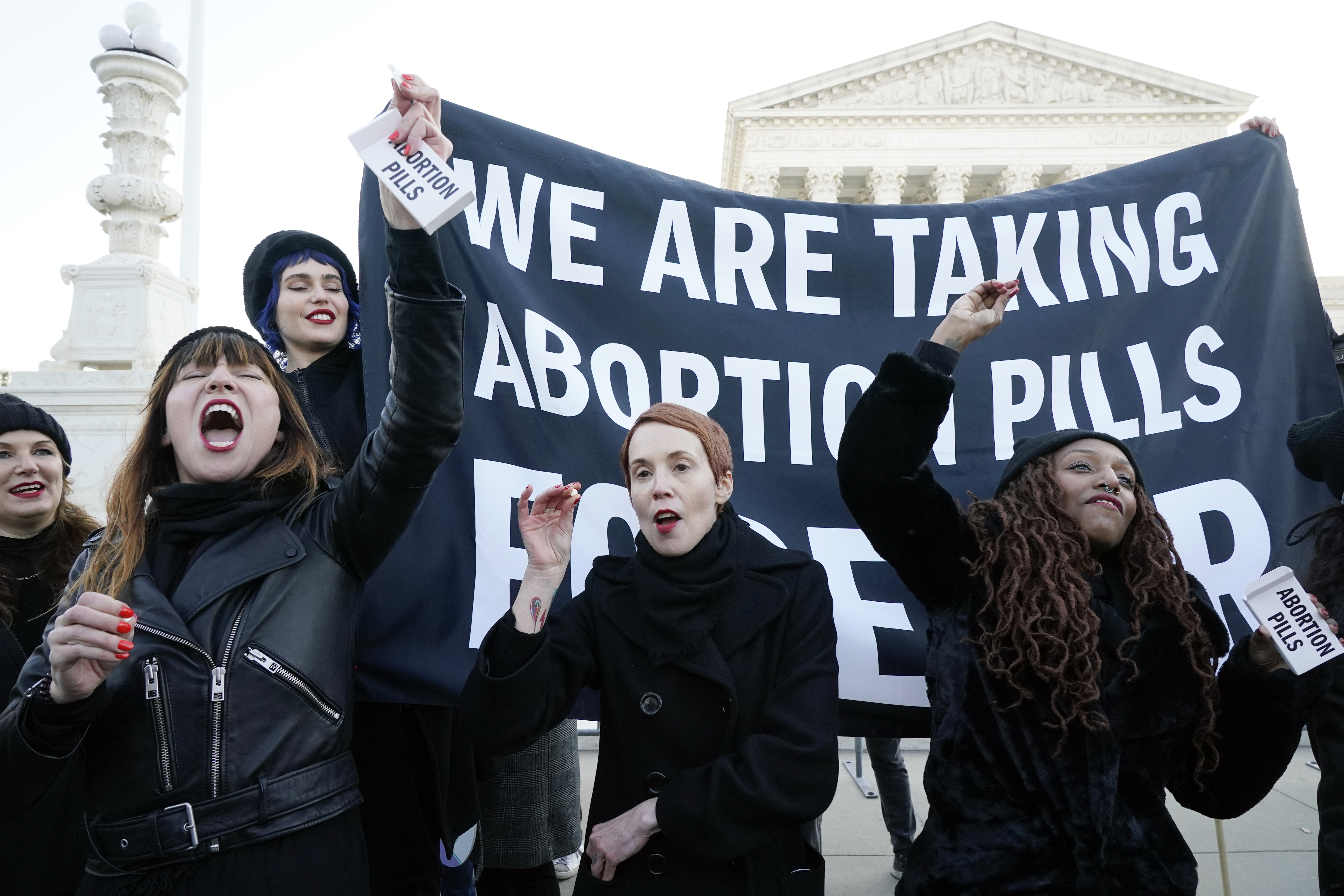 If the FDA ignores or rejects the petition, as is expected, the group Students for Life of America plans plans to sue.

The new push is the culmination of years of brainstorming around how to restrict access to the pills — particularly since their use surged following the outbreak of Covid-19 and the FDA’s ruling in 2021 that they are safe to take at home without a doctor present.

“We knew chemical abortion was the future even before Dobbs happened,” said Kristi Hamrick, the chief policy strategist for Students for Life, who called her organization’s environmental focus “the next innovation in ending the use of this damaged tool of abortion.”

While they deride the tactic, abortion-rights advocates fear the wastewater arguments could have a chilling effect even in states where abortion remains legal — making doctors hesitant to prescribe the pills and patients afraid to seek them.

“It’s a pretty egregious argument that really shamelessly co-opts the environmental movement for their own agenda,” said Jenny Ma, a senior counsel at the Center for Reproductive Rights who has argued cases related to abortion pills. “Not only are they not citing actual science here but they’re trying to shame and stigmatize abortion and separate it from other medical care.”

Students for Life — which has worked closely with the Trump administration and GOP lawmakers on anti-abortion policies, has active chapters on hundreds of campuses across the country and sponsored get-out-the-vote work in 33 states in the midterms — said the petition is just one part of a national strategy.

The group is working on bills to implement the medical waste requirement with Rep. Bob Good (R-Va.) and other members of the incoming GOP House majority as well as state lawmakers in Arizona, New Hampshire, Ohio and Wyoming.

With Leonard Leo, the Federalist Society president who has been influential in putting more conservative judges on the bench, co-chairing its board and the conservative legal powerhouse Alliance Defending Freedom, whose attorneys helped draft and defend the Mississippi anti-abortion law that eventually toppled Roe v. Wade, advising them on the campaign, Students for Life is also pushing conservative state attorneys general to bring enforcement actions against doctors and abortion pill manufacturers, and is planning a tour of college campuses to advocate on the issue.

Should they prevail in any jurisdiction, the rules would be so burdensome that use of the drugs could be effectively cut off, several groups representing abortion providers told POLITICO. And even if they are unsuccessful in court, the effort aims to sway public opinion at a time voters have become increasingly accepting of abortions early in pregnancy.

“It’s hard for me to imagine even a Trump-friendly judge going for an argument about wastewater regulation, but you never know. Anytime you deal with abortion, judges get weird,” said Mary Ziegler, a law professor at the University of California, Davis and author of “Abortion and the Law in America.” “And we know that the more the anti-abortion movement can get people to think about fetal remains and other concrete details about what abortion entails, the more uncomfortable Americans become. So, it could be helpful for them even if it doesn’t go anywhere legally.”

The group’s FDA petition argues that the high number of people using pills to terminate pregnancies at home and flushing fetal remains down the toilet — which has increased in part due to the same group’s efforts to overturn Roe v. Wade and restrict access to surgical abortions — poses risks to the environment.

It claims without direct evidence that trace amounts of the drug in wastewater could threaten livestock and wildlife as well as humans, citing some studies in which the drug was given directly to animals rather than ingested from groundwater, and others where drugs flushed directly down the toilet contaminated the water supply.

“Pharmaceutical contamination of water is a serious issue that can have serious impacts on the environment, but trying to say that one drug out of thousands is having an outsized effect is based on ideology not evidence,” said Nathan Donley, the Environmental Health Science director for the Center for Biological Diversity, who has written citizen petitions to the FDA. “Of all the drugs and synthetic chemicals we shed that can potentially contaminate water, abortifacients are a fraction of a fraction of a percent. It’s nothing.”

Also referenced repeatedly in the petition are studies about the environmental impact of hormonal contraception, leading some experts to ask whether conservative groups will apply the strategy to other drugs in the future.

“It seems like they’re laying the groundwork for considering contraception itself as medical waste,” said Susan Wood, the former FDA assistant commissioner for Women’s Health and a professor of health policy at George Washington University.

Hamrick insisted the group’s work “is confined to abortion-inducing drugs” and that it only cited studies of birth control to argue that it’s also worth studying the impact of abortion pills on “aquatic and animal life, as well as the food supply.”

The petition acknowledges that the FDA did examine the potential environmental impacts of abortion pills when it first weighed approval, quoting a 1996 report in which “the Center for Drug Evaluation and Research has concluded that the product can be manufactured, used, and disposed of without any expected adverse environmental effects.” But Students for Life argued this study is inadequate and outdated, and further testing is warranted. The group also demanded the agency require that patients who take the pills place the fetal remains in a medical waste “catch kit” and return them to the medical provider.

A spokesperson for the FDA told POLITICO the agency is “aware of the petition and will respond directly to the petitioner,” and declined to comment further.

Citizen petitions are a tool used by both sides of the decades-long fight over abortion and contraception, and some have led to changes in FDA policy. One pending at the agency from the Center for Reproductive Rights, the American Medical Association and other groups, for example, is asking the agency to loosen rules around abortion pills to make them more accessible for patients experiencing a miscarriage.

Zachary Kester, the general counsel for Students for Life and author of the petition, said while he and other anti-abortion advocates consider the FDA “ground zero” for their efforts, they’re also pursuing other avenues.

“We’re talking with lawyers around the country about different strategies, and talking to state regulators to identify a path forward,” he said.

Should a legal challenge based on its arguments about abortion pills make it up to the U.S. Supreme Court, the group could find a receptive audience.

“The court has not shown itself likely to defer to the federal agencies,” Ziegler noted. “You are working with a court [that] is skeptical about the administrative state in a way that may be helpful to them.”

At the same time, the group is also pushing members of the incoming House GOP majority to use the appropriations process to force the FDA to conduct environmental studies. They are also working with state lawmakers like Ohio Republican Rep. Jena Powell and federal lawmakers like Good on bills to introduce next year to impose a medical waste requirement on abortion pill use.

In a statement to POLITICO, Good called the flushing of fetal remains “reckless” and a “disgusting practice.”

With Democrats still in charge of the Senate and White House, the effort isn’t likely to change federal law. But Students for Life is hoping to gain traction in GOP-controlled states and influence the public’s views on abortion pills as the drugs are becoming more socially acceptable and state efforts to ban them have proven impossible to enforce.

“For those not concerned about chemical abortion pills for their harms to the preborn and to women, perhaps they’ll be worried about what’s in the water,” Hamrick said.

Are the coaches eyeing the future with Justin Fields’ usage? How does the Chase Claypool trade look after 3 weeks? – Twin Cities

The Global Luxury Travel Market size is expected to reach $1,574 billion by 2028, rising at a market growth of 6.3% CAGR during the forecast period

The scramble to sell cyberweapons to dictators – POLITICO