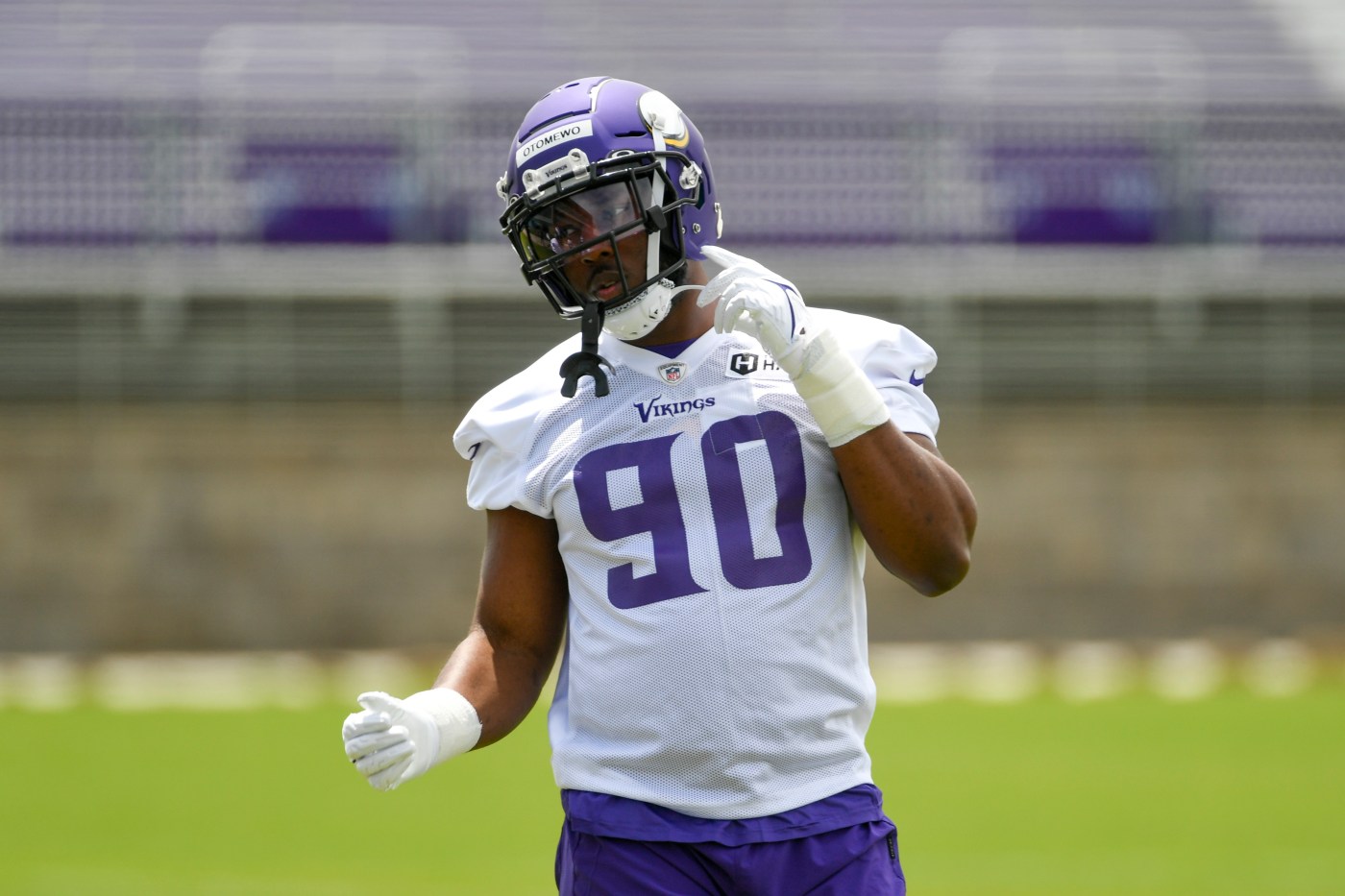 Ross Blacklock offered a hefty sum to get fellow Vikings defensive lineman Ezesi Otomewo to relinquish his jersey No. 90, but he was rebuffed.

Otomewo, a rookie from the University of Minnesota, said Wednesday that Blacklock offered $30,000 for his number but he turned it down. Blacklock, who wore No. 90 at Elkins High School in Missouri City, Texas, at TCU and in his first two seasons with the Houston Texans, was acquired Aug. 30 and given No. 96. He spoke last week about his hope to again get No. 90, and about negotiations with Otomewo.

“He worked on me pretty hard,’’ said Otomewo, who signed a four-year, $3.97 million contract after being drafted in the fifth round. “But I’ve got number 90 right now. I’m glad I’ve got this number. I like 90.”

Otomewo wore No. 9 with the Golden Gophers. He chose 90 with the Vikings because 9 stands for his college number and 0 for his nickname “The Big O.”

Blacklock said last week he was willing to offer to pay all of Otomewo’s fines as a rookie for No. 90, and was willing to “go more” than the $2,000 of fines he accumulated as a Texans rookie in 2020. As it turned out, he ended up offering way more than that.

Cook hasn’t played in the preseason since 2019. There were no exhibition games in 2020 due to the coronavirus pandemic and he was rested in each of the past two preseasons.

The Vikings rested nearly all of their top starters during the preseason under new coach Kevin O’Connell, and Cook believes that was a good move. The team also was careful not to overwork players in training camp.

“(The medical staff) came together with a great plan for us as a team to keep us where we needed to be for Week 1,’’ Cook said. “I feel great and I know a lot of the guys feel the same way. … (It was) some new science stuff that they put in for us as far as keeping us fresh (in training camp), the days we go, the days we don’t. It was good for us.”

Something else that made Cook feel good was his alma mater, Florida State, defeating LSU 24-23 on Sunday. Cook had bets with receiver Justin Jefferson and cornerback Patrick Peterson, who both played at LSU, and were forced to wear Florida State shirts at the TCO Performance Center on Wednesday.

“(Jefferson) and Pat Pete, they held up their bargain,” Cook said. “They had to put on that Florida State gear. I didn’t get any pictures of them. I didn’t want to put them all over the (internet).”

For the first time in his career, Vikings linebacker Eric Kendricks is a team captain.

Kendricks was named Monday one of eight captains in voting by Minnesota players. The other seven are holdovers from last season while Kendricks replaced departed linebacker Anthony Barr.

“It feels good,’’ he said. “I’m just going to keep doing what I’ve been doing, (but) not do too much. My teammates voted for me, so I appreciate that.”

Kendricks, entering his eighth NFL season, will face Packers quarterback Aaron Rodgers on Sunday for the 14th time in his career.

“You know what it’s like facing Aaron Rodgers,’’ Kendricks said. “He makes a bunch of crazy throws that you can’t really plan for.”

Vikings defensive lineman Dalvin Tomlinson went against Rodgers three times in his first five NFL seasons and didn’t get a sack. He hopes that will change Sunday.

“I always want to get a sack of him,’’ Tomlinson said. “Hopefully, this week. … That’s the game plan.”

Tomlinson, who faced Rodgers with the New York Giants in 2019 and twice last season, said he has “gotten close” to getting to Rodgers a few times.

The Vikings are mourning the loss of longtime college scout Kevin McCabe, who died Sept. 3 after battling leukemia.

“He was with us for over 20 years, college scout for our organization, did an unbelievable job for a long time,” O’Connell said. “Made so many great relations and had an impact on a lot of people. … A lot of people are hurting inside our building. .. Everyone obviously mourning the loss of a really great person.”

All Minnesota players on the 53-man roster took part in practice. The only one listed on the injury report was starting defensive end Jonathan Bullard, who was limited with a bicep injury. … Vikings tight end Irv Smith Jr., who suffered a right thumb injury Aug. 1 and had surgery Aug. 2, said Monday he will play against the Packers and wasn’t on Wednesday’s injury report. Smith missed all of last season due to a knee injury. “I miss his energy, miss everything about him at that position,” Cook said. “Just having him back is going to be big.” … O’Connell said offensive coordinator Wes Phillips, who split the preseason between on the field and upstairs in the booth, plans to be upstairs during the regular season.