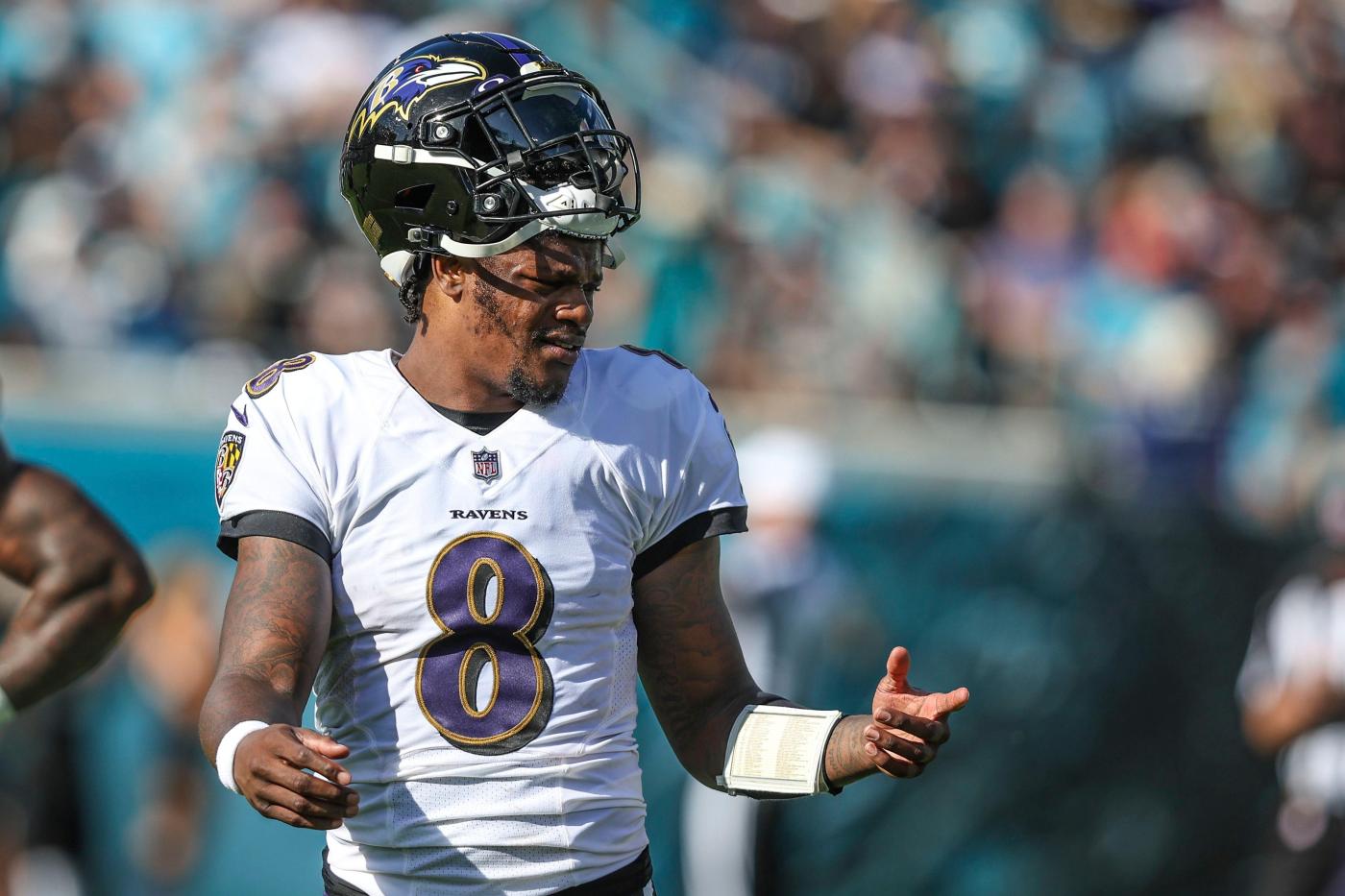 If anything has summed up the Ravens’ slow-going, late-snapping, barely-beating-the-play-clock offense this season, it might not be the delay-of-game penalty they took in the first quarter Sunday. It might be what came immediately afterward.

The timing on the play, a 5-yard completion to Andrews, was so off that Jacksonville’s edge rushers were already 2 yards downfield by the time Devin Duvernay, the receiver in the bunch formation closest to the line of scrimmage, crossed the 15. Like Andrews and wideout Demarcus Robinson, the third player in the cluster of receivers to Jackson’s right, Duvernay looked surprised to see the ball snapped when it was.

Hours later, after another fourth-quarter collapse had doomed the Ravens to a 28-27 loss in Jacksonville, the first-quarter sequence was a minor footnote in a game rife with what-could’ve-beens. Still, it pointed to a broader problem with offensive coordinator Greg Roman’s play-calling approach.

By one metric, no other offense takes longer to get going. According to a review of data from play index site nflfastR, 35.2% of the Ravens’ plays in the first, second and third quarter this season have been snapped with three seconds or fewer on the play clock, the league’s highest such rate. (Fourth quarters were excluded from the sample to account for clock-draining strategies in end-of-game situations.) As of Sunday’s games, only three other offenses’ late-snap rates were above even 21%.

The Ravens are also tied with the Denver Broncos, Green Bay Packers and Seattle Seahawks for the most delay-of-game penalties (six) in the NFL this season. Had they taken a seventh Sunday, in a cruel twist of irony, they might’ve avoided a costly turnover on downs. Harbaugh acknowledged Monday that Jackson’s failed fourth-and-1 quarterback sneak early in the second quarter, snapped with no time left on the play clock, wasn’t communicated or executed well.

The Jaguars had opened the game with one first down over their first two drives. Handed a short field on their third possession, they needed less than two minutes to take their first lead.

“I think we can call it faster, communicate it better in the huddle, whatever,” Harbaugh said Monday of the Ravens’ presnap operations. “The whole thing needed to be faster, and we did adjust kind of what we were in in the second half to try to make that happen, to make sure we could do it. The rhythm and the tempo were not like what we needed them to be at all.”

Harbaugh recalled Roman telling him at some point Sunday that his play-calling from the coaches’ booth wasn’t coming fast enough. The Ravens’ pace was indeed less of an issue after halftime; with a quicker tempo and a sprinkle of no-huddle plays called in by Roman, the threat of a dwindling play clock was effectively mitigated.

But Harbaugh, in explaining the first half’s slower execution, also noted some of the structural impediments to a more go-go offense. The Ravens are among the NFL’s leaders in presnap motion, which takes time. They substitute liberally, mixing and matching tight ends and wide receivers and running backs, which takes time. Jackson has the freedom to change plays at the line of scrimmage, which takes time.

Other times, though, the wait proves too long. A delay-of-game penalty knocked the Ravens’ red-zone offense off schedule in the third quarter of their Week 9 win over the New Orleans Saints, and they had to settle for a field goal. Another delay-of-game penalty two weeks later, in a victory over the Carolina Panthers, turned a third-and-8 in the fourth quarter into a third-and-13, a difference that became all the more stark after Robinson caught a 9-yard pass on the subsequent play. Again, kicker Justin Tucker was called on for another field goal.

“There are times when you run it down for reasons, and there are times that you need to run it down to make sure you get the right play call,” Harbaugh said Monday. “Lamar has been really good at that over the years. He’s one of the best guys at dealing with the play clock and getting the ball snapped and all that kind of stuff. So we just have to adjust as coaches on that. It’s up to us to organize it in a way that we just don’t get in those situations. If we have to have less offense, or less movements in the plays, or whatever it might be, that’s just what you do. So it’s on us. That’s something we have to get cleaned up.”

Maybe the most confounding element of the Ravens’ slowdown is how quickly it’s happened. In 2015, Roman’s only full year as Buffalo’s offensive coordinator, the Bills snapped the ball with three seconds or fewer on 16.3% of their first-, second- and third-quarter plays, according to nflfastR. In 2019, Roman’s first year as play-caller in Baltimore, his late-snap rate jumped only slightly, to 18%.

There were marginal upticks the next two years, too: 20.7% in 2020 and 22.2% in 2021, when the Ravens had eight delay-of-game penalties, tied for fifth most in the NFL. Both marks would’ve ranked among the five highest this year, but still significantly lower than the team’s 2022 pace.

Roman, asked about the offense’s late arrivals to the line of scrimmage after the team’s season opener, said in September that “sometimes it’s good to drain the clock. People don’t realize that sometimes, but it’s really good at times. You can really drain a clock in the course of a game. I think we set the all-time NFL record for time of possession a couple years ago, and a lot of it was because of that process, really. And there are times when that’s not the way to go.

“So the bottom line is, we want to be efficient with how we operate, and we’d like to be at the line of scrimmage, most of the time, to where we can operate.”

With only six games left in the regular season, and the Ravens’ battle for playoff positioning only tightening, the clock is ticking.

Will Democrats raise some taxes when there’s a historic $17.6 billion surplus? – Twin…